The normal appearance of a breast

What does a normal breast look like? Watch the following video by Laura Dodsworth:

Development of the breast

During fetal development, the breast first arises as a pigmented nipple elevation of the chest skin, on each side of the sternum. The breast ducts are formed by an invagination of these nipples. The milk duct structure and the nipple of the breast are present at the time of birth.
The breast glands develop during puberty under the influence of hormones. During this period, they are also surrounded by more fat which contributes to the final adult volume and shape.
During pregnancy, the glands are temporary activated to produce milk by hormone stimulation.
During menopause the breasts atrophy and decrease in volume.

Structure of the breast

In the anatomical position, the female breast lies at the level of the second to the sixth rib.  The breast covers a large part of the pectoralis major muscle.  The breast can be considered in terms of its volume and its skin envelope.  The skin envelope is partly responsible for the shape of the breast.

The nipple and areola are important features at the ‘top’ of the breast.  Both contain pigments.  The areola is usually round.  The nipple is located centrally in the areola.  Randomly distributed around it, small pale coloured bumps can be found called Montgomery glands. They produce sebum.  In some circumstances, they may lead to a cyst.

The female breast is composed of approximately 15 to 20 lobes.  Each lobe is made up of many smaller lobules where under certain hormonal conditions milk can be produced.  The milk duct collects the milk from the lobules and carries it to the nipple.  The lobes are embedded in adipose tissue and are separated by fibrous membranes which are attached to the underlying muscle, holding the entire structure together.  These fibrous membranes are the ligaments of Astley Cooper.  Together the skin, the adipose tissue around the glands and the glands themselves, determine the overall shape of the breast. 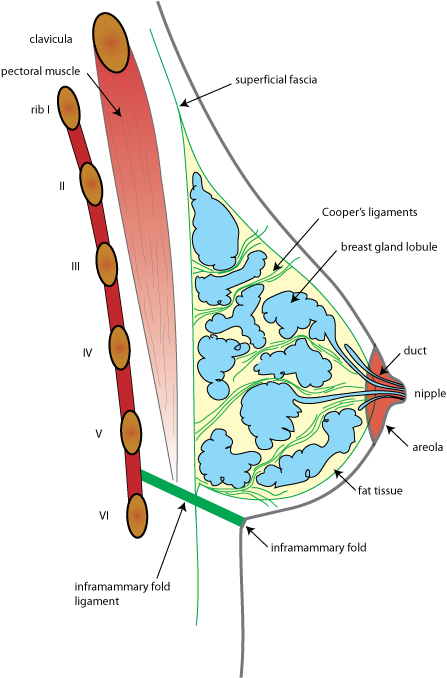 Fig. 1. Composition of the breast: glandular tissue (blue), fat (yellow) and connective tissue strands (green) are contained between two sheets of the superficial fascia, a tough connective tissue layer that surrounds the entire body.  A strong ligament determines the position and shape of the inframammary fold.  The chest is separated from the underlying pectoralis major by a network of loose connective tissue.

Blood supply of the breast

The breast has a rich blood supply from a number of different sources. The main supply is from an artery that originates in the armpit.  There is an additional supply from both the internal throracic arteries (originating near the sternum) and from the arteries of the ribs.

Drainage is through a network of veins which follow a similar pattern to the arteries and, additionally, through a complex framework of superficial veins just under the skin.  Many of these veins are visible to the naked eye.

The lymphatic drainage of the breast is an equally large network and plays an important role in breast cancer.  Much of the lymph is drained from the outer chest wall to the lymph nodes within the armpit (approximately 20 to 30 ‘axillary’ lymph nodes). The remaining lymph is drained towards the midline, to the lymph nodes in the region of the sternum (parasternal nodes). The two axillary lymph node regions are connected with each other via a lymphatic network across the chest. The lymph then flows from here to beneath the collarbone and the base of the neck. There is a direct connection to the large veins that run back to the heart. In some rare cases there is also direct drainage to the mediastinum, liver, parasternal and axillary lymph nodes from the other side and along the ribs. 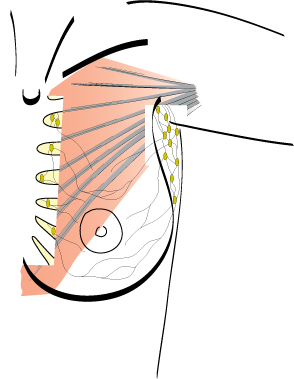 Sensation to the breast skin is supplied by nerves that run horizontally from the sides towards the center of the chest between the 2nd to the 6th ribs. The nerve at the level between the 4th and 5th rib is especially important as it provides sensation to the nipple and areola. The upper areas of the breast are innervated by superficial nerves coming down from the base of the neck. 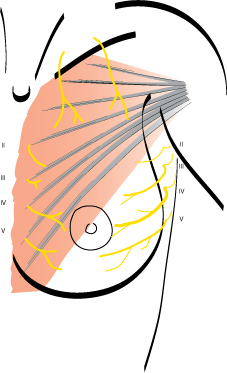