The DIEAP and SIEA flaps consist of skin and fat from the lower abdomen. In contrast to the TRAM flap, no fascia or muscle is sacrificed when these flaps are harvested. As a result, there is no functional loss or weakening of the anterior abdominal wall.

During DIEAP flap dissection, the rectus abdominis muscle is opened along the line of its fibres (fig. 1). The perforating vessels which pierce the muscle to supply the overlying skin are then freed from their surrounding connective tissue (fig. 2). The rectus abdominis muscle is therefore kept intact and its blood supply, nerve supply, function and strength are all preserved.

Figure 1: Schematic representation of a DIEAP flap (a, b) and the resulting scar on the lower abdomen (c). 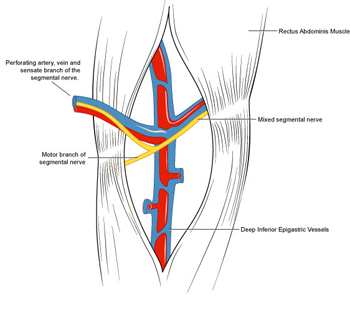 Fig. 2: Splitting the rectus abdominis muscle in the line of its fibers exposes the underlying vessels and nerves.

The deep inferior epigastric vessels are then divided in the groin. This temporarily stops the blood supply to the flap but the tissue can survive like this for 6 hours. The flap is then transferred to the chest wall and positioned over the mastectomy defect. An artery and vein have simultaneously been prepared next to the sternum at the level of the 3rd or 4th rib. These are the internal mammary or internal thoracic vessels (fig. 3), comparable to the deep inferior epigastric vessels, with dimensions of between 1 and 3 mm. Both sets of arteries and veins are then sutured together using an operating microscope. Once connected, blood flow is restored and the flap quickly recovers.

Fig. 3: Possible vessels that serve as recipient blood vessels to connect the flap to.

At the donor site, the fascia covering the rectus abdominis muscle is repaired. This closure is tension-free, as no fascia has been resected and synthetic mesh is never required. The remaining skin is then undermined up to the costal margin, the umbilicus brought out again, suction drains inserted and the abdomen closed in layers. Finally, skin adhesive (surgical glue) is applied to the incisions, providing an additional layer of support to the wounds and also acting as a waterproof dressing.

It is possible to restore sensation to the DIEAP flap, if the perforator selected is accompanied by a sensory nerve. This nerve is the anterior cutaneous branch of one of the mixed segmental nerves which supply the rectus abdominis muscle. The lateral cutaneous branch of the 4th intercostal nerve is the preferred recipient nerve, if it can be retrieved at the mastectomy site. When a connection is possible, there is improved sensory recovery in the new breast.