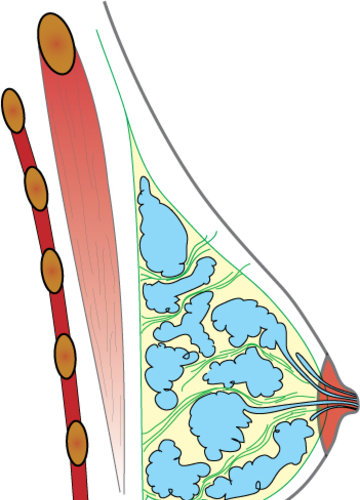 The breast is a gland common to both males and females. Men only have glandular tissue confined to the nipple and areola. This is also the case for girls before puberty, but during puberty this glandular tissue enlarges considerably.

Puberty lasts 4 to 5 years in girls and follows a similar pattern. The first stage is called the ‘growth spurt’ where growth is accelerated. Next comes early breast development: the areola increases in diameter and the areola and nipple protrude from the chest. On average this happens before the age of 10.

About nine months later, further development occurs alongside that of the pubic area. The hair near the armpit is visible two years later. The first menstrual bleeding occurs around the average age of 12.8 years. There is a range in age when girls experience their first period: some as young as 9 years old; others can pass the age of 17 before they experience menstruation.

Next the breast volume increases. The change in shape and volume of the breast is due to an increase in the gland tubules, adipose tissue and the supporting tissues of the breast. The mammary gland is usually fully developed around the age of 14 to 15 years.

After puberty, the extensive system of ducts increases. During each menstrual cycle, the number of channels increases. In addition, these channels also continue branching. If you cut through the channel and view it under a microscope, (Fig. 1), a hollow tube surrounded by cells that are neatly arranged next to one another can be visualized. These cells are called epithelial cells. Around these are smooth muscle cells surrounded by a thin membrane (Fig. 2). 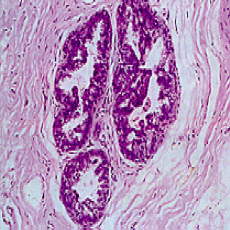 Figure 1: Transverse section through a breast duct as seen under a microscope

The breast in pregnancy

The shorter the period between the first menstruation and the first full-term pregnancy, the lower the risk of breast cancer. The exact mechanism of the beneficial effect of pregnancy (before 30 years of age) in the mammary gland is still unknown. The majority of cells in the breast ducts produce milk under the influence of pregnancy. This leaves fewer cells to control cell division and development of new cells. Although these latter cell types are needed to replace breast cells, they are also prone to transformation into cancer. The more limited their number, the less the chance of breast cancer. After pregnancy and / or after discontinuation of breast-feeding, the mammary gland returns to its normal volume.

Taking birth control or using an intrauterine hormonal device (IUD) will not affect the risk of breast cancer. In a normally menstruating woman, taking birth control pills will have virtually no influence on the appearance of the breast, especially when a low dose oral contraceptive is taken. For many women with premenstrual breast tension, the pill will even give an improvement in symptoms.

The number of breast operations continues to rise as more and more young women have corrective breast surgery. Due to the development of late complications and the natural aging process, one or more re-operations will be required in up to 20% of these women within a few years.

A significant proportion of these women are in the fertile phase of their lives, which means they may choose to have children in the period following surgery. Surgery always leaves scars and this affects the ability to breastfeed after giving birth.

Potential complications resulting from the operation should always be discussed with the patient. These include the presence of scars and the process of scar maturation, the possibly altered sensation to the breast and nipple and the implications for pregnancy and lactation. Operative techniques can be adapted for women who wish to become pregnant and breastfeed. They may be advised to postpone surgery if uncomfortable with any of the potential adverse effects.

Generally speaking, breastfeeding is still possible after corrective or aesthetic surgery of the breast. This is clearly dependent on the exact type of operation. Extensive surgery and multiple operations will inevitably make the possibility of breastfeeding less likely, especially if the feeling in the breast and nipple / areola is absent.

Below is our advice for postoperative breastfeeding according to the procedure performed:

In this procedure, the breast is enlarged using a silicone implant. The implant may be placed on or behind the pectoral muscle. Most women can breastfeed after a breast augmentation.

Problems can occur when a scar around the areola is made. In this approach, the milk ducts and nerves are cut, with the resulting negative consequences on breastfeeding. The feeling in the nipple may also be reduced.

When the volume of the breast prosthesis is large (especially when placed on the pectoral muscle), the prosthesis exerts so much pressure that the breast tissue scars and shrinks, with inevitable consequences.

Often women who have undergone breast augmentation with silicone implants are concerned that the silicone might contaminate the breast milk. However, research has shown that this is not the case.

After a breast augmentation capsular contracture may occur around an implant. If this is very extreme, reoperation is necessary, with potential increased scar formation and damage to the breast tissue, thus adversely affecting future breastfeeding.

When lipofilling (injections of fat) is used to increase either a portion or the entire volume of the breast, fat is injected behind the gland and between the skin and gland. In this way the gland itself is not affected and there will be no interference with breastfeeding.

This procedure is performed for women who have large breasts that cause functional problems, such as back, neck and shoulder pain. There are several techniques for this operation, but in general the nipple and areola are moved upwards and tissue is cut away at the bottom and / or centrally in the breast. The scars are around the areola, vertically downwards from the areola and usually horizontally in the crease underneath the breast.

Even after a breast reduction, most women can successfully breastfeed, although this is dependent on the surgical technique. Today’s sophisticated procedures result in less damage to the nerves of the breast and the milk ducts. The duration of breastfeeding is however often shorter than in women who have not undergone surgery. It is also possible that the amount of milk is insufficient for the baby and that additional bottle feeding may be required. Problems are particularly likely in women where a lot of breast tissue was removed during surgery and where there is reduced or no nipple sensation.

In patients who get a postoperative wound infection, scarring may occur in the breast with additional consequences.

Some women who have undergone breast reduction, are frightened to breastfeed because they fear that this may have an adverse effect on the shape of the breast, but this is not true.

In a breast lift, the breasts retain their volume but the nipple and areola are returned to a ‘normal’ position. Technically this is done only by removing excess skin in order to re-shape the breast.

Often breasts are weakened due to the aging process or after pregnancies and / or weight loss. Many of these women are unconcerned about the ability to breastfeed, but generally, in comparision to a breast reduction, the breast tissue and nipple areola are unlikely to be damaged in this type of surgery and therefore breastfeeding remains possible.

The exact cause of congenital breast abnormalities (abnormalities in the breast from birth) is unclear. In an extreme case, the breast is not formed. At other times, one or both breasts may be tubular in shape (see also Developmental Disorders of the breast).

For psychological reasons, correction is highly desirable and often started at a younger age (around puberty). Breastfeeding in a deformed breast may result in problems and is sometimes impossible. There is too little or no breast tissue and surgery may cause further damage or adverse consequences. If the other breast is unaffected this may be used to breastfeed.

This term is used in women who have had breast cancer, when part or all of the breast has been removed and a reconstruction has been performed. Logically, breastfeeding is not possible afterwards.

Any further pregnancy in breast cancer patients also results in an increase of female hormones in the bloodstream with a concomitant increased risk of developing new tumors, recurrences or metastases.
Read more

The onset of the menopause typically occurs at 52 years. After that, few sex hormones are produced by the ovaries. Hormonal stimulation in the breast tissue decreases. This disappearance of the female hormones can cause problems which can be divided into short and long term;

The most recognizable problems in the short term are the vasomotor symptoms. 60% of women experience flushing, problems with irritability and poor sleep. These symptoms can be very social disabling.

In the long term, loss of hormone production can cause bone mineral loss and osteoporosis. In later life, this may result in fractures of the vertebrae, hips and wrists. The skin of the vaginal lining becomes thin and brittle. This may cause pain during intercourse. The lining of the bladder may also become thin, leading to incontinence. There is a clear link between the loss of hormone production and dementia.

The loss of sex hormones results in a regression of the glandular tissue of the breast. The breast tissue contains more primitive glandular tubes again, while the highly branched glandular tubes decrease in number. Other women in the menopause clearly gain weight. The fat accumulates mainly in the abdominal wall. An increase in body weight may also increase breast volume.

Women with menopausal symptoms (hot flushes, sweating, poor sleep, irritability) may opt for hormone replacement therapy (HRT) under expert guidance. When this treatment is correctly prescribed, it clearly improves quality of life. The most effective hormone to reduce symptoms is oestrogen. If the patient is only taking oestrogen, however, this will also stimulate the lining of the uterus. This can lead to blood loss and a prolonged intake of oestrogen increases the risk of uterine cancer. If progresterone is added to the oestrogen hormone, uterine bleeding and cancer is prevented. The risk of uterine cancer will be even lower than in women not taking hormones. The disadvantage of the daily combination of high-dose oestrogens and progestogens, for a period greater than five years, is the slight increase in breast cancer. Especially with synthetic hormones. This increase in breast cancer is due to the progesterone. Indeed, placebo-controlled randomized trials have shown that oestrogen alone does not raise the breast cancer risk. On the other hand, a big european study has shown that a combination of a natural oestrogen with a natural progesterone is safe, even after 10 years of intake. A progesterone containing spiral (IUD) can rest the uterus in women who take oestrogen alone. The IUD is not a high dose of progesterone circulating in the body and thus avoids the increased risk of breast cancer. This IUD can remain in the womb for five years. It can be placed at a routine consultation therefore avoiding oral progesterone. There are also recent data on the effect of other preparations on the breast which appear to be very promising. Each individual patient should contact her own doctor to arrange the optimal treatment for her.

A change of lifestyle after the menopause is also very important. Sport, moderate alcohol intake (one glass a day) and weight loss will also substantially reduce the risk of breast cancer. Is also essential to have at least one mammogram every two years, whether taking hormones or not. For further information, consult your doctor.