The ‘pedicled’ Latissimus Dorsi musculocutaneous flap (LD flap) and the ‘pedicled’ ThoracoDorsal Artery Perforator Flap (TDAP flap) have been described in the section on breast conserving surgery. These flaps can also be used for complete breast reconstruction, although unless the breast is relatively small, the amount of tissue available is frequently insufficient.

To compensate for this deficiency, an “extended” latissimus dorsi flap can be performed or a breast implant simultaneously inserted. In an extended latissimus dorsi flap, the entire LD muscle, together with additional subcutaneous fat is harvested. However, this creates a large undermined wound, with a high risk of recurrent seroma formation and significant back asymmetry.

Frequently, the LD or TDAP flap is therefore combined with an implant. This approach can produce good results, but it does combine the disadvantages of implant reconstruction (see complications of implants) with those of free tissue transfer (see free flap complications).

In many centres, the back is reserved as a salvage procedure after failure of a free flap or implant based breast reconstruction (fig. 1).

Fig. 1: (a) Total flap necrosis of the right flap after a bilateral DIEAP flap. (b) status after complete removal of the right flap. (c) The failed right DIEAP flap was removed and replaced by a pedicled Latissimus Dorsi (LD) flap and an implant. Nipple reconstruction and tattooing were performed at a later stage.

The skin and subcutaneous fat from the inner thigh, just below the groin, can be harvested as a free flap, with or without a piece of the underlying gracilis muscle (fig. 2). However, sufficient tissue must be available to make this donor site worthwhile. As with other autologous techniques, the flap is transferred and microsurgically connected to the internal mammary vessels. 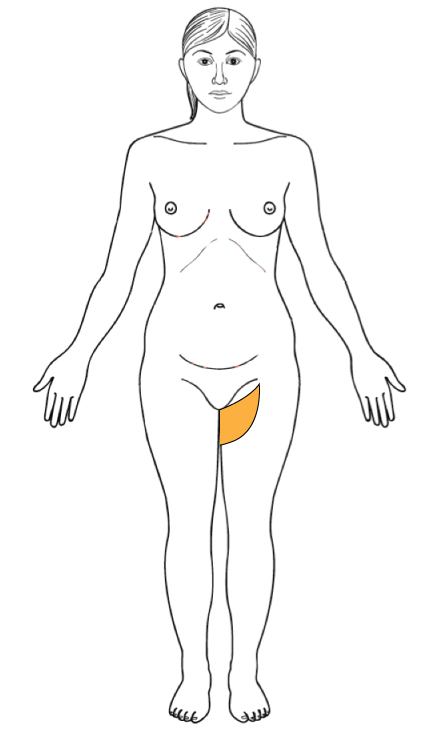 The main advantage of the inner thigh donor site is that the blood vessels supplying this tissue are large and easy to dissect, considerably reducing the operating time. Unfortunately though, the amount of tissue available is often small, making this area only useful for reconstruction of small to medium sized breasts. The resulting scar on the inner aspect of the thigh is often conspicuous and descends over time to below the groin crease. Hollowing may also occur, limiting bathing costumes. Finally, problems with sexual intercourse, a high incidence of seroma formation and wound healing problems have all been reported.

This flap is therefore indicated in small to medium sized breast reconstruction for women in whom donor tissue from the abdomen, gluteal area or back is unavailable.

Excess skin and subcutaneous fat overlying the iliac crest (the ‘love handles’) can also be used for breast reconstruction (fig. 3). The tissue is supplied by the deep circumflex iliac or superficial circumflex iliac vessels. The dissection of this flap is technically challenging and almost always involves harvesting the underlying abdominal oblique muscle. 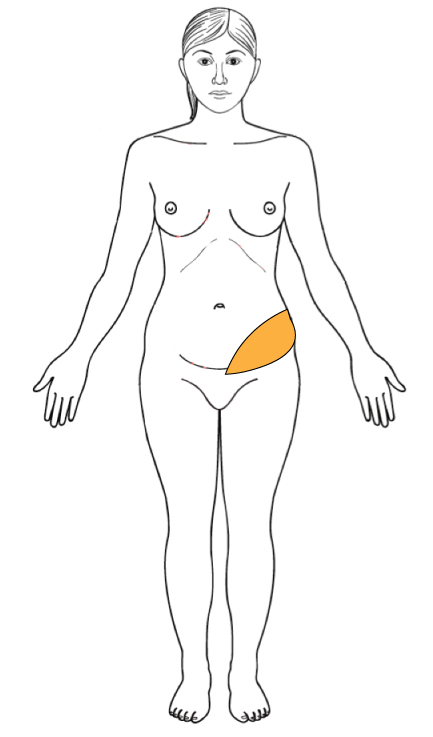 Although the aesthetic improvement in the area overlying the iliac crest can be dramatic, the functional loss may also be significant. Additionally, the donor site scar covers the entire flank and therefore this flap is only recommended in exceptional circumstances.

The front of the thigh

The Anterolateral Thigh (ALT) flap was first described by Song, Chen et al in 1984 and has been described as the ‘ideal soft tissue flap’, due to the versatility of this large, pliable piece of tissue and the resultant minimal donor site morbidity (fig. 4). 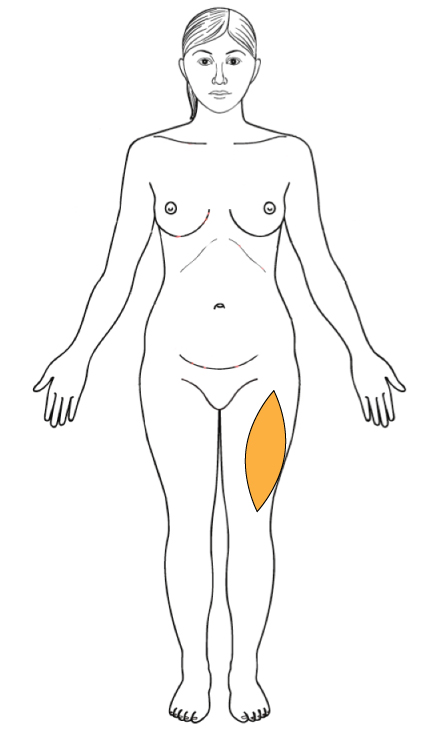 The ALT is supplied by a perforator from the descending branch of the lateral circumflex femoral artery and does not involve the sacrifice of a major vessel or muscle. The lateral femoral cutaneous nerve can also be preserved within the flap, enabling sensory re-innervation.

Although popular in head and neck reconstruction, this flap is seldom used to re-create a breast because of its very conspicuous donor site scar.

The back of the thigh

One of the latest developments is the Profunda Femoris Artery Perforator (PFAP) flap (fig. 5). Excess tissue below the lower gluteal crease can be harvested based on the perforators of the profunda femoris artery. The vascular anatomy in this region can be very variable, but a pre-operative CT-angiogram can identify the dominant vessels. 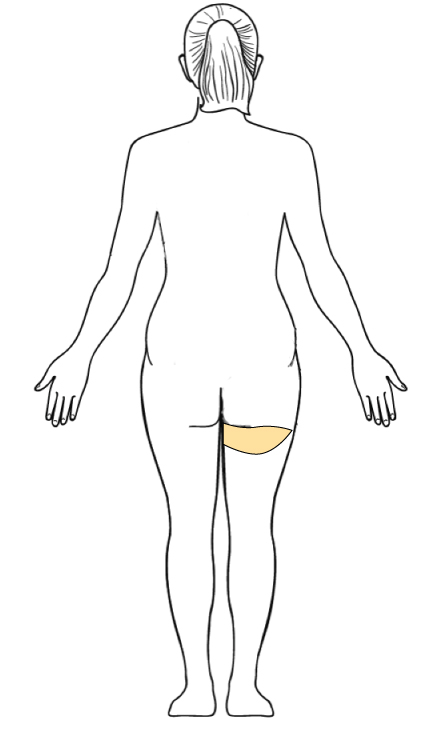 The donor site scar lies in the gluteal crease, but may descend over time. Again though, there is no functional loss, as no muscle is harvested. The flap is transferred and microsurgically connected to the internal mammary vessels.

The PFAP flap is a potential option for mildly obese women in whom the more routine choices for autologous reconstruction are unavailable.